Hayden says of the release: “It’s all about being present in the moment and allowing that positive force in your life to lift you up when you’re feeling down. Nathan, Emie and I wrote this record in the summer this year over a couple of zoom sessions from Nashville to London then finished the track off in Ibiza for the summer vibes. I hope you love it. This one feels special.”

“Good Life” lands in the wake of Hayden James’ Australian tour, a six-date run celebrating the arrival of his applauded sophomore album LIFTED earlier this year. Supported by Boo Seeka and Memphis LK, Hayden performed to illustrious arena and auditorium-sized venues across the country throughout August and September, delivering his high energy, high emotion live show. After delivering on some of his largest performances to dates, including a packed-out bucket list Coachella set, Hayden James now continues his career legacy by relocating to the US. He spends the next few months meeting his new neighbours at packed shows across America throughout October and November, before a brief return to Australia for a tour with Spilt Milk festival.

Hayden’s sophomore album, LIFTED infused the same emotion of his applauded live shows into every moment, fueled by a desire to create an energetic and uplifting collection that could help bring people together, and deliver a slice of joy to his fans after much time spent apart over the past few years. The record enlisted a slew of special guests including Elderbrook, Boo Seeka, Jem Cooke, SIDEPIECE, YAEGER and Cassian, as Hayden expended rippling energy via lush production, vocal textures and consistently addictive dance cuts. Representing hours of collaboration, emotion, and an expansion of his enduring legacy in dance music, LIFTED received national praise from tastemakers and community radio, alongside being awarded triple j’s Feature Album on release, with tracks from the album accumulating over 36 million streams since release.

Since breaking out in 2013 with “Permission to Love” and going on to release revered platinum certified hits “Numb” feat. GRAACE, and “Just Friends”, the producer has continued to be at the forefront of the Australian house music scene, carrying on his run of hits with his ARIA-nominated debut album Between Us in 2019 which sits at over half a billion collective streams. His production mastery on tracks like “Waves of Gold” feat. Azteck as well as “Right Time” with Icona Pop has also landed in the international spotlight, receiving love from Zane Lowe on Beats 1, triple j, as well as Rolling Stone, Pitchfork, NME and many more. In the live arena, Hayden has enjoyed success touring across the globe, hitting major venues including NY’s Webster Hall, LA’s Fonda Theatre, Amsterdam’s Paradiso, as well as lighting up national tours and festivals, including Melbourne’s Beyond The City and Sydney’s 2022 Field Day.

From one of Australia’s dance heavyweights, sink into the soul warming groove of “Good Life” from Hayden James today, as he continues to lift us all with his unique brand of emotion-fuelled house. 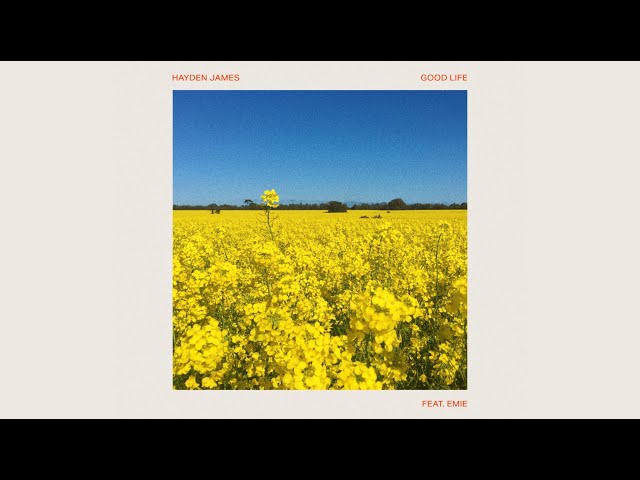