As one of the OGs of the Australian bass music scene, Hydraulix has always been ahead of the pack. And now he is ready to drop his latest single, ‘iSSUES’ featuring Pittsburgh artist Wyatt Erbb. Taking his signature bass sound and adding a pop-punk vocal and attitude, ‘iSSUES’ is out April 22nd on Eighty-Six and signals another step forward in Hydraulix’s genre-mashing catalogue of music.

Hydraulix explains how the track came together: “I’ve really been enjoying a lot of pop punk and hyperpop recently and wanted to try and do something in that vein with my own flair and style. I met Wyatt Erbb while I was in Pittsburgh last year and knew that this was the guy to help me bring iSSUES to life.”

Having spent the better half of his 2021 touring in the US and Canada after a year of COVID cancellations, Hydraulix is a producer in demand, taking on North America supporting Liquid Stranger and bookings at festivals like Lost Lands, Bass Canyon, Rampage Belgium, Electric Zoo NYC and many more. His debut album Imposter Syndrome boasts collaborations with rapper Jasiah, Grammy Award-winning producer Nitti Gritti, and iconic dubstep producer Doctor P and ticked over one million streams.

Some of his acclaimed releases ‘Spanner’, ‘Chopper’, ‘Poor Connection’ and ‘Nothing Can Stop Me’ have garnered millions of streams and are a favourite among artists like Four Tet, Skrillex and Rusko. Hydraulix’s recent collaborations include Liquid Stranger, Moody Good, PhaseOne and Ookay along with his attention-grabbing EPs Bruxism, Space Cadet and Crown Jewels, solo releases and remixes with Never Say Die, Disciple and Wakaan. Hydraulix has also journeyed into the world of TV feature music with a featured sync in Kipo and The Wonderbeasts for Netflix US. Continuously working and touring, Hydraulix is one of the hardest working names in Australian bass music, taking his unique style of music from Australia to all around the world.

Having recently headlined the sold-out Whispers event at Chinese Laundry, Hydraulix will be playing Ministry of Sound’s Testament warehouse party in Sydney in June before heading back to Europe to play Rampage festival in Belgium this July. Catch Hydraulix on the below dates and get ‘iSSUES’ from April 22nd. 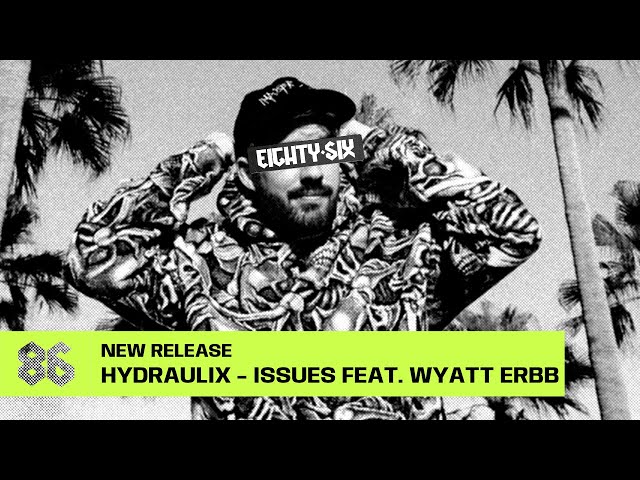