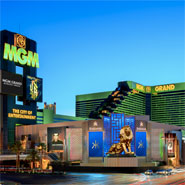 As a leader in experimental hospitality, MGM Resorts are most recognized for designing, operating, providing services and amenities for destination hotels around the globe. The Hakkasan Group is a global lifestyle company that primarily focuses on restaurant, lounge, and nightlife experiences.

With the combined forces of the two companies, MGM Hakkasan Hospitality will center their activity on developing and managing luxury non-gaming hotels, resorts, and residential offerings. This will take place under the Bellagio, Hakkasan, MGM, and SkyLoft brands in key international cities around the globe.

Currently working on new ventures in the Americas, Middle East, and Asia; the hospitality group sure has its plans to grow and make themselves one of the most recognized hospitality agencys in the world. Current CEO of Hakkasan Group, Neil Moffitt will now become the new CEO of MGM Hakkasan Hospitality.